← On: Madiba
What else I’ve been watching →

So… yeah, I’ve been a little absent for the last… *checks date on last post* 4 years it seems! Sorry about that. I’d claim the PhD as an excuse, but I could probably have found a way to keep writing regardless. I guess I just got tired of it and needed a break for a while. That said, I’m back for real this time people. I considered moving on from this place, but we kinda have history. And I’m stubborn.

So… what have I been up to since I last blogged? Well, I’m finally done with the PhD! 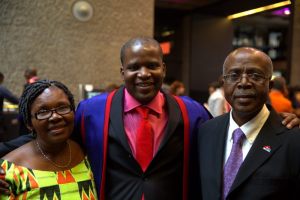 I graduated in July of this year with a doctorate in Physics from King’s College London and most of my family were around for what was a great moment in my life. The picture above is of me and the parents, who I owe immeasurable amounts to, even if I do a bad job of showing it from time to time.

Besides that, I did actually do other things. I didn’t read as much as I would have liked because of work, but I’m back to devouring books again, and it feels good, so expect more book reviews from me. I also kept up with judo. I would probably already have my black belt except for the fact that I’ve spent the vast majority of the last 2 years being massively inconsistent in my training. I did train quite a bit before that though, and compete too. The picture below is of my crowning achievement to date, a bronze medal in the kyu grade division (all grades below black belt) of the British University Games. 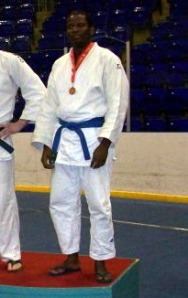 I’m not done with the sport by a long shot though, so I still want more on that front.

As for what I’m doing now, I somehow managed to convince a professor in one of the most prestigious research universities in the world that I know my stuff enough to work for him doing cool science(TM) so, barring British immigration deciding they don’t really like me, I’ll be working as a postdoc for the next 4 years. That means playing with microscopes, lasers, optical equipment, fast computers and squishy bits of biology. It should be all sorts of great.

As for what I’ll be talking about here… as usual it’ll be a mix of whatever comes to mind. I have some book reviews on tap, there’s a movie or two I want to talk about, there will be a lot more science (and an embarrassing amount of Neil Degrasse Tyson love) science fiction, technology, race, politics, sports…. Whatever makes me happy.

If you are still reading this after 4 years of silence, then thank you by the way. That was substantially more attention than I deserve. I’ll try to make it worth your while this time.